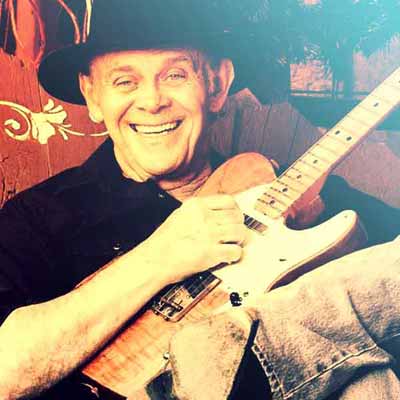 2020 marks guitarist Charlie Brownâs 50th year in the music business. Shortly after arriving in New York at age nineteen -- a green kid from rural Georgia -- Charlie was hired to be part of the Atlantic Records studio musician staff. He was immediately immersed in being recorded on numerous hit Atlantic artistâs releases. Soon after, he became musical director and lead guitarist for Van Morrison at the peak of his Brown-eyed Girl era, and toured with his band.

Charlieâs talents landed him the lead guitar spot in the most influential Broadway show of its era, Hair, where he performed for an amazing four-year run. While in the show, Brown was signed to compose and record two albums, Up from Georgia and Portrait of a Glad Man. Continued studio work -- including jingles, records, and film scores -- kept him very busy as well.

During his career, Charlie has played on over 1,000 recordings, the list of which reads like a whoâs who of the industry. His most cherished work remains the Platinum record on his wall for playing on Barbra Streisandâs hit Song Bird album.

Brown moved out to Los Angeles in 2003 and continued doing what had always been his passion; original recordings. He has released four original CDs, since being on the west coast. Charlie's new release, The Good Old Days, is a mixture of his original compositions, along with favorites from other artists & songwriters who have inspired him over the years like Johnny Cash, Jimmy Reed, Fred Neil, among others. âStylistically, I recorded this in a Roots/Americana vibe, which has always been a favorite,â noted Charlie. âI hope everyone enjoys it!â